What is accretion in accounting?

Accretion is the periodic recognition of an expense associated with an increase in the present value of a liability over time. This expense is recognized as an operating expense in the statement of income. In practice, accretion expense is commonly recognized in relation to an asset retirement obligation (AROs).

Per ASC 410 Asset Retirement and Environmental Obligations, section 20 (ASC 410-20-35-1), if multiple events occur to impact the value of the ARO, the value of the ARO is adjusted. Reductions to the ARO liability estimate require adjusting the current ARO liability and accretion schedule. Increases to the ARO liability estimate are considered additional layers. Each layer of the liability is recognized at its fair value, which is the same as present value, in the period in which the event causing the change occurred. For example, an US oil company might incur an ARO liability for returning leased land to its original condition. Midway through the lease, the US and Canada reach a trade halt which forces the oil company to find an alternative provider of peat moss, a common crop used to help clean up leaking oil, increasing the estimated costs of returning the land to its original condition. Measurement and recognition of additional ARO liability layers will be required if the company has to pay more than initially expected.

Accretion is not the same thing as amortization. Amortization is an accounting technique best conceptualized as depreciation for intangible assets. It is used to periodically reduce the value of these types of assets over an estimated useful life. Amortization generally applies to leased right-of-use assets, patents, trademarks, loans, and other non-physical assets.

On the other hand, accretion is the accounting treatment used when a liability has been discounted to present value at initial recognition and subsequently increased over a period of time. This applies to AROs, such as environmental remediation liabilities which result from normal business operations, and represent an expected future payment by a lessee to restore their leased asset back to its original or non-specialized condition.

A helpful way to think about amortization expense and how it differs from accretion expense is to look at its effect on your financial statements. An illustration of the entry shows a debit/decrease to equity, caused by the debit to an expense account, and a credit/decrease to the asset account:

Below is an illustration of the financial statement effect of an entry recognizing accretion expense showing a debit/decrease to equity, caused by the debit to an expense account, and a credit/increase to the liability account:

Example: Accretion accounting for an ARO liability with journal entries

Below is an example of how to account for accretion expense with journal entries, including an event during the lease which leads to an incremental liability that must be recognized as an additional layer.

At lease inception, the company informs the owners of the building they would like to install different smart accessories to accommodate their proprietary technology. It will cost an estimated $50,000 at the end of the lease to remove the accessories and restore the building to its original condition. The present value of this $50,000 obligation in 5 years time at a 4% annual rate must first be calculated using LeaseQuery’s free downloadable present value calculator tool: The $41,096 represents the present value of the estimated $50,000 asset retirement obligation to be paid at a future date, and is recorded on January 1, 2017 as follows:

At the end of each year, Benjam, Inc. records accretion expense as the present value of the expected future liability accretes to the full $50,000 payment. The accretion schedule is shown in the table below: 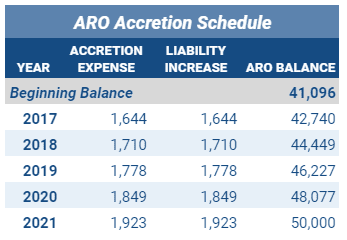 The journal entry to record accretion at December 31, 2017 is as follows:

On January 1, 2019, the start of the third lease year, Benjam, Inc. made a major technological breakthrough and quickly updated their leased building accordingly. The updates increased the expected future cost of the asset retirement from $50,000 to $300,000. Given this new information, the corporation must update their recognition of the present value of the expected future asset retirement obligation. First, Benjam, Inc. calculates the present value of the additional $250,000 expected future expenditure as follows: As discussed above, ASC 410-20-35-1 states incremental liabilities incurred are considered an additional layer of the liability, and recognized at fair value in each subsequent period.

Below is the accretion schedule for the complete ARO. Going forward, Benjamin, Inc. will have to keep track of accretion expense for both layers:

Benjam, Inc. will record an accretion entry for the combined total of both layers at December 31, 2019:

At the end of their lease on December 31, 2021, Benjam, Inc. has fully accreted the expected future liability of $300,000. The actual cost to remove their leasehold improvements from the building is $300,000 and Benjam, Inc. makes the following entry to pay for the retirement costs and relieve the liability:

In this instance the asset retirement costs equalled the estimated liability. However if the actual costs to remove the leasehold improvements were less or more than the estimated costs, the difference would have been recorded as a gain or loss, respectively, on the income statement.

As you can see, properly accounting for accretion liabilities and AROs, even in this simple example, is technical and challenging. In the real world, added complexities of making improvements to your leased assets, accurately estimating the cost to retire those assets at termination, and multiple updates to your original estimates exist.